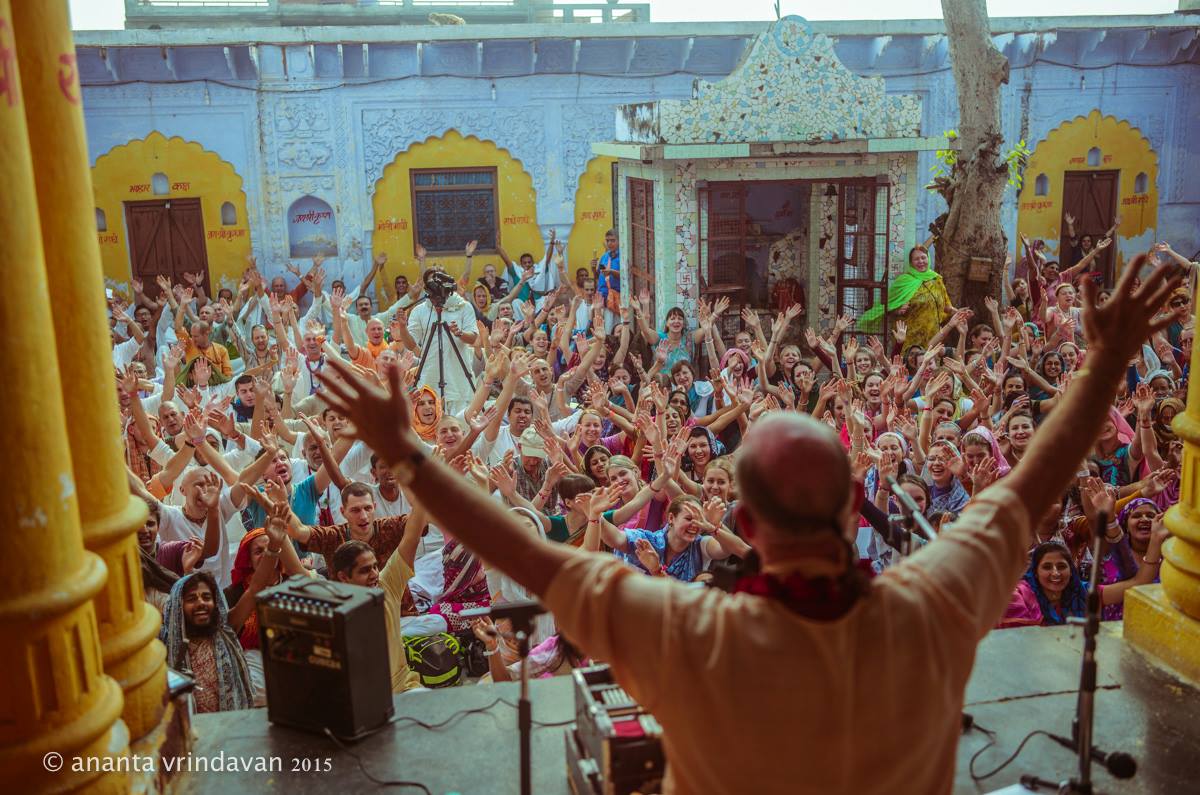 It’s even getting more cloudy, which is nice because it’s even cooler than it was earlier. And the weather is going to start changing—that means it going to sometimes be hot, and sometimes even cold. This is not deep spiritual philosophical wisdom, it’s just kind of practical knowledge that you have to be careful not to get sick in the changing weather patterns. 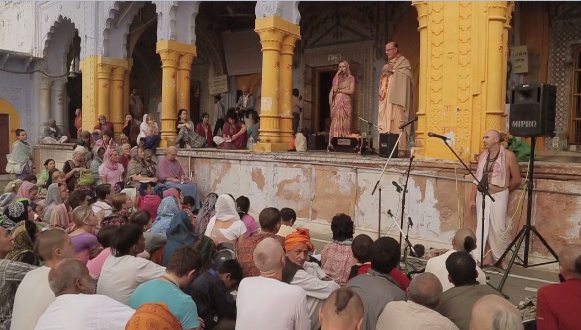 I think when everyone goes out now, you should be wearing a sweater, some socks or maybe even a hat, because if it gets cold, you should be covered. You shouldn’t get sick, because once your immune system goes down, then you can get something more serious. And when it is sunny, be careful not to get too much sun. There’s a big difference between the sun in Russia—Moscow, Paris, and New York—and the sun in India. It’s a very intense sun here that can deplete you and make you sick. Well, you could get heat stroke or even sun stroke.

One golden rule in India is you should only drink bottled water and you never eat outside. When we come to places like this, we are providing nice Prasādam. When we’re back at the Kṛṣṇa–Balarāma Mandir, they have Prasādam every afternoon there. But don’t eat out at sweet shops.

Don’t eat out of the sweet shops. Don’t eat ice cream from those little carts they carry around. When they don’t sell it one year, they put it in the freezer and they bring it out the next year. They don’t sell—the next year’s ice cream is ten-twelve years old. [Laughter] I’m exaggerating, but be careful. 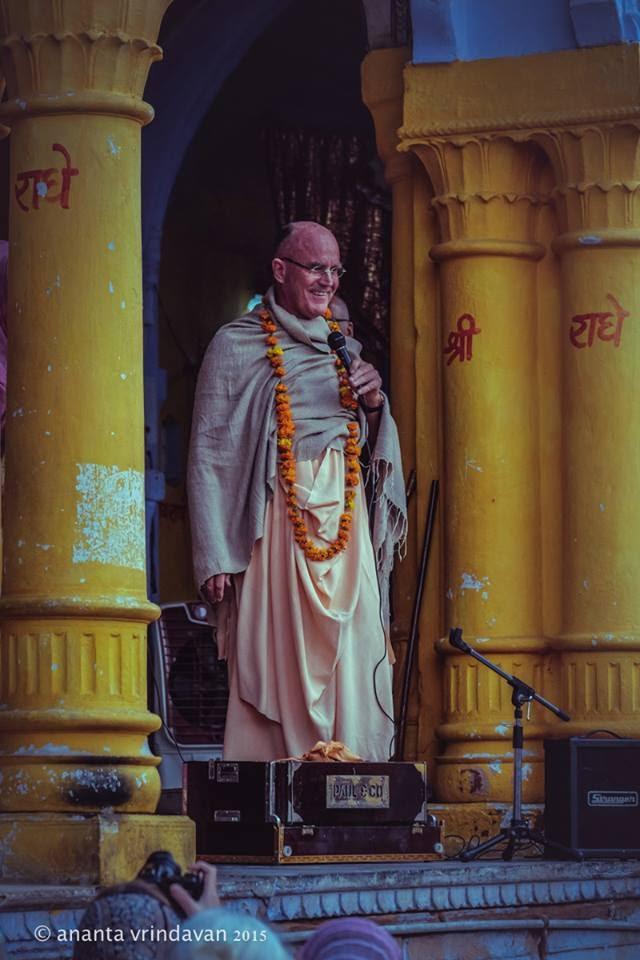 Don’t eat from the food stands, like when we’re at the bus stops on the way to Jaipur. Those little stands—they sell yummy samosas and pakoras and khachori. But you don’t know who cooked there, where it was cooked, what pot it was cooked in.

If you’re hungry—eat fruits. If you wash the fruits, it’s generally safe, especially fruits that have a skin on them like oranges or bananas. You can have them. You can eat extra fruits and nuts. You can get some nuts in packages, that’s pretty safe. But generally, we will be providing nice Prasādam at Noon. And at the temple they have Prasādam and many of you can cook where you’re staying. You have in your lodging or apartments, you can cook Prasādam there. I said this last year and then ten minutes after the talk, I walked outside, devotees were buying ice cream out of the little box, for five rupees or whatever. Be careful!

Be careful of the animals. I know the cows are really cute and especially the little calves, but every calf has a Mommy looking after that little calf. The Mommy may come and charge you. Respect the cows from a distance.

How many of you have ever been on the Polish festival tour in Poland during July and August? Oh, wow! [Polish word]. It’s intense, but this is ten times more intense. This is the first day, it’s real easy. But we get up quite early, we are driving, we are out, we are walking around everything. So when you get back, it’s good just to relax in the evening. Maybe you can go to the temple and offer the lamp, like that, and so forth, but be careful not to stay up too late. Don’t eat late at night.

Your main purpose in being here is going on Parikramā and hearing the Kathā and participating in the Kīrtana and seeing all these wonderful places. If you stay up at night and socialize, you’re walking and talking and sitting, looking around, then you go to bed late and you gradually become more and more tired, and you won’t be able to keep up with us.

We are speaking from many years of experience, like forty years of being in India, having survived. If you get sick, let my management team know. Rasikā Śiromani, she’s got nothing to do [Laughter]. You can tell her, we’ll find a doctor for you. We have the best doctors. If you get sick, take care of it immediately. Just let us know, and we’ll take care of you. If you get a little cut, you take care of it immediately. We have antibiotic creams you can buy over the counter here. In America, we come with “Neosporin”, it has antibiotics in it. You can also get something similar in all the pharmacies here. You get a cut, immediately put some antibiotic cream and a band-aid. Don’t let it go more than 2-3 days. Even a mosquito bite, if you scratch it, then it gets infected, so put on some antibiotic cream, put a band-aid on, you’ll be okay.

Another very intelligent thing to do while you are in India: we have this hand wash, the antibacterial hand wash they sell all over the world, you can even get it in India. Whenever I’m anywhere, I’m all the time just cleaning my hands with this liquid, because you don’t know what you’re touching when you’re going on, this and that, and the animals and the sides of the building. If you keep your hands clean with this disinfectant, and then when you touch your mouth, you won’t transfer a disease. I travel with this everywhere in the world. There are different kinds of it. 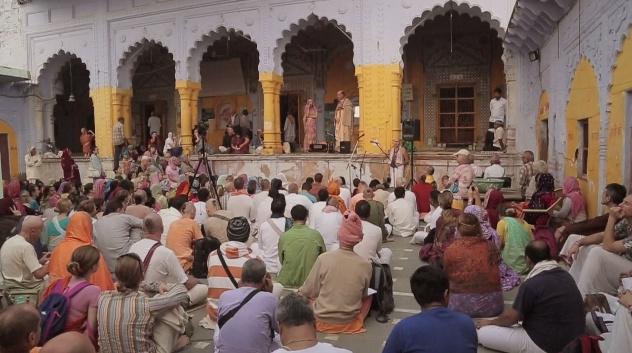 In the West, in Kṛṣṇa Consciousness, we follow the rule: eat to your full satisfaction. In India, we have a different rule: under-eat. Especially don’t eat too much at night. Don’t go to MVT, have a pizza, think, “I’m going to sleep really good.” And everyone’s going to probably get a little diarrhea. We’re being quite open here. Fast; just don’t eat anything for a few days, just drink water. Don’t eat, take a little yogurt; it will cool your system down.

And the monkeys are so cute. We heard how Kṛṣṇa’s playing with His monkeys here in Vṛndāvan. Rāma had a whole army of monkeys, but you’re not God. The monkeys, they just want to be rascals, and they will steal your bags, they will steal your glasses. I’ve had at least 26 pairs of glasses stolen in the last 40 years. Watch out for the monkeys! There’s one monkey, I see him, he has stolen six bananas in the last five hours here, and I don’t know where he is now. Also, always be respectful to the locals. Never argue with anyone: rickshaw-valas, never get in any arguments. One last point, as far as our Parikramā is concerned, always be on time. It all starts with getting up early in the morning. I know it’s not easy sometimes, but the buses are going to leave at 5:30 am, maybe ten or twenty minutes later. But it’s always good to be on time, as everything functions smoothly, and it saves everyone’s time.

All this is not as interesting as Kṛṣṇa’s pastimes, and stories about Durvāsā Muni, but it’s practical advice that will make your Parikramā experience much smoother, healthier and enjoyable. Now during my talk this morning, I committed a great offense. Without knowing it, I told the pastime that Caturātmā Prabhu was going to tell, about the boy that Durvāsā Muni cursed to be a crocodile. He has been waiting months to tell that story! So during Prasādam, he was practically in tears. I said, “What’s wrong?” He said, “You told my story!” Seriously!

So I said, “You will have nothing to say this afternoon?”. So I got my computer out, and I had one more story I was going to tell if I had more time, so I’m going to give him one more story that I had that he can tell. I actually gave him my notes on the computer and he has been memorizing them since Prasādam. But of course, it’s not my story; it’s a beautiful pastime which I touched on earlier, about the ten questions that Yudhisthira answered to Yamarāja. It’s a very important, instructive pastime and Caturātmā is an excellent preacher. He’s a very popular class-giver, so with great pleasure, we turn the program over to Caturātmā, who will tell this wonderful pastime. Because I just disappointed him and made him cry, please give him a big round of applause as he comes forward.