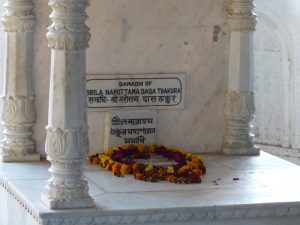 Today is the disappearance day of Śrīla Narottama Dāsa Ṭhākur. We are blessed as Baḍa–Hari Prabhu is with us. We will be singing one of Narottama Dāsa Ṭhākur’s songs to open the program: “Ye anilo Prema-dhana”, which we sing on the departure day of great Vaiṣṇavas. Mādhava Prabhu will be leading Kīrtana later on in the morning.

Of course as I was telling you, Ṭhākurāṇī is here—Śītalā Devī Dāsī—my dear Godsister. She will be speaking extensively on the pastimes, the teachings of Śrīla Narottama Dāsa Ṭhākur. She has just joined our Parikramā from Māyāpura. You please give her a big round of applause—Mother Śītalā [Applause, Haribol!]. [Sound of monkeys jumping on rooftop]. They are also applauding in their way [Laughter]. She will be with us much of our Parikramā and she will be speaking on different Vaiṣṇava personalities at different times. We are very blessed to be here in Śrī Vṛndāvan Dhām. It’s a very auspicious day.

Just next to the Pushpa Samādhi of Narottama Dāsa Ṭhākur is the full Samādhi of his Guru Mahārāja, Lokanātha Gosvāmī. 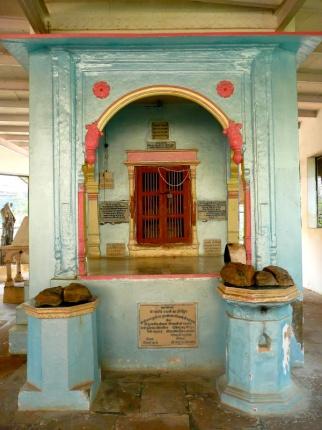 We are very blessed that from Moscow, Russia comes Bhakti–Ananta Kṛṣṇa Mahārāja to join us with his group today. Please give Mahārāja a big round of applause. [Applause, Haribol!].

I am sure that Śrīla Narottama Dāsa Ṭhākur is very pleased with Mahārāja. The preaching he does is his Mahā, Mahā, Mahā, Mahā-Mahotsava—the festivals throughout the country of Russia. We are very much honored, Mahārāja, that you have joined us today.

All Glories to Śrīla Prabhupāda.

We would like to ask the devotees to move forward, because we have many more devotees coming, so just take about two minutes, kind of stand up, and move as far forward as you can to give room for the other devotees.