As we mention every year, this has become a great tradition in our Parikramā party which visits Jaipur from Śrī Vṛndāvan Dhām during the month of Kārtik, to comes here and associate with the Mangalam family and have nice Kīrtana, Kṛṣṇa Kathā and prasad. We would like to thank all the members & extended members of the Mangalam Family; in particular, Kṛṣṇaji, Omji & Śyāmaji. Rājiva wouldn’t let me mention his name so I won’t. (Laughs) I got away with that one somehow or other. But thank you, all of you, for giving us this opportunity to come and have your association and have a wonderful program here at the factory where you produce so many amazing objects. 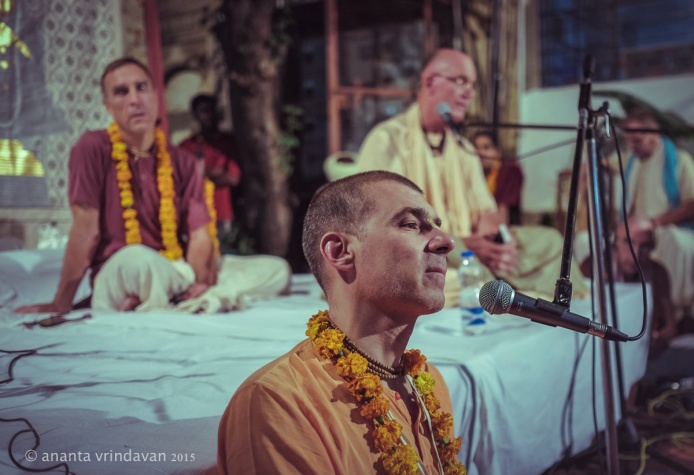 I know that our devotees, look forward to coming to Jaipur in particular to see our beloved Deities Śrī-Śrī  Rādhā–Govinda. We actually always come here for the Saṅga, for the association because we’re so impressed and so touched with the devotion, the Bhakti, that the people of this city have for these wonderful Deities of Rādhā Govinda-deva. As they are very dear to the people of Jaipur, they are now very dear to people all over the world by the mercy of our spiritual master Śrīla Prabhupāda, who spread this Saṅkīrtan movement practically speaking to every town and village in the planet.

Every living entity is an eternal servant of Lord Kṛṣṇa.”So those who are fortunate, those pious souls they realize this and in their life-time they try to revive that forgotten relationship. Most people in this world are simply concerned with themselves and in their pursuit of sense gratification but,

There’s a few souls in this world who come to the point of realizing that the point of life is to reestablish our lost relationship with God and they do their best to do so. The word religion as we were mentioning this morning comes from the Latin word “reglio” which means to reconnect with God. Just like the Sanskrit word “yoga” means to yoke—to reconnect also with the Absolute Truth, with Bhagavān, with Kṛṣṇa. 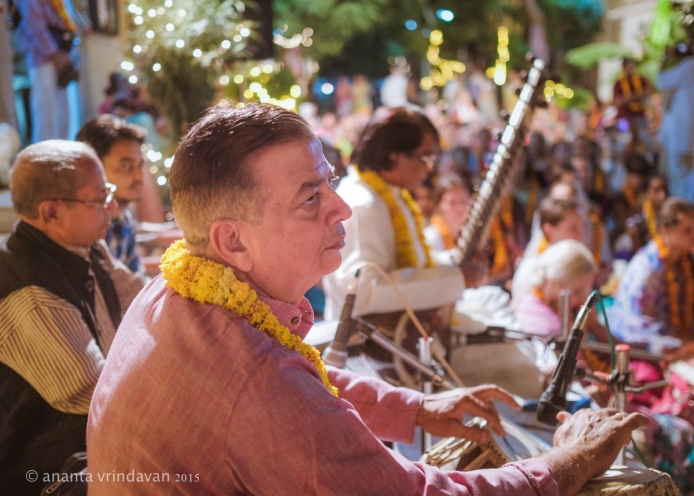 By the mercy of the Lord in His incarnation as Śrī Caitanya Mahāprabhu that process becomes very simple in the age of Kali. As described in the Bṛhad Nārāyaṇa Purāṇa:

Only when that relationship with Kṛṣṇa, that relationship with God is reestablished, can we actually be happy. I was watching the mother and her little baby, so the baby was very happy in the mother’s arms but she wanted to experiment, so she came here and she went here, but as soon as she came back in her mother’s arms she fell asleep, she was very happy. As soon as we reconnect with Kṛṣṇa through the via medium of His Holy Name; of which He is non-different then we see that we become happy, we smile, we laugh, we stand up, we dance because we’re reconnected with our beloved Lord.

I was reminded recently of a story one devotee who was formerly a policeman had told me. He was on duty one time in London and he came across a young girl who had somehow become separated from her father. They were on a shopping spree. It was a Saturday afternoon and it was a very crowded day, and Daddy and his little girl had come downtown to do some shopping and somehow in the surge of this huge crowd—the little girl was about 6 or 7 years old— became separated from her father in the big crowd. In desperation she just sat down on the curb and started crying and people brought this to the attention of this policeman. The policeman was thinking we’ll take her to the police station, and we’ll make some calls, and we’ll find her family somehow. He told me that in the meantime to stop her from crying he said, “Well, you know, let’s go buy an ice-cream.” But she actually started crying more; she said, “No, I want my father. I don’t want ice cream; I want my father.” My friend, he was previously a policeman, he said, “Okay, let me think here, look, there’s a toy store here; let’s go buy you a dolly.” Then she really started again, “Nooo, I want my father.” He reached in his pocket and saw how much money he had, a few pounds, he said, “Well, a beautiful dress?” “Nooo, father!” There were five or six or seven things he tried and she just refused; what she really wanted was her father. She just cried more and more and more; so suddenly at that point somehow or other the father had been searching for the daughter as well, he appeared from the crowd and the little girl saw him and she—my friend said he’ll never forget the look on her face when she saw her father—just ran and jumped in his arms and hugged him and said, “Father, Father, Father; you found me!” (Laughs)

I sometimes think almost as an analogy that our situation is very similar; we are in this world and we have so much facility for sense gratification, so much facility for material enjoyment but we’re not really happy. At best we can only pretend that we’re happy. Because along with all the material assets come so many complications. You have to maintain them, you have to protect them and you don’t have time to enjoy them. (Laughs).

I went to a shop here in Jaipur the other day with Narottama, and we met one business man and he’d come practically from poverty to becoming one of the most successful businessmen in India and we walked in and there was so much paraphernalia and stacks of rupees and I said, “Oh, you’re doing well,” and he looked at me, he said, “Mahārāja, you know I was happier when I had nothing. Now my life is so complicated. So I’m thinking of the day I’ll become renounced like you and then true happiness will begin.” (Laughs) Of course, that’s not to say we don’t need material facility, we do need material facility but in our heart of hearts what we know is we really need to reestablish our lost relationship with our Father, with Kṛṣṇa. And unlike—unlike other spiritual processes like yoga and jnana and Tyāga, which may take many life-times to reestablish that connection, it can be done immediately just by the mercy of Lord Caitanya Mahāprabhu by chanting the Lord’s Holy Names—

We thank Kṛṣṇaji, Omji, Shyamji and Rajeevji for giving us this opportunity to come together in such an amazing exotic beautiful atmosphere every Kārtik, and together with the family and the friends and the employees, we all sing together the sweet names of the Lord and remember the lotus feet of our Iṣṭadeva, Govindaji.