I thank Pañca-Gauḍa Prabhu and Gargamuni Prabhu for giving me the opportunity to speak so early in this ceremony. There is a common saying in society that, “You can judge the greatness of a person by how many people—or more important, who— attends their funeral or memorial service.” So as I look around here at this august assembly of Vaiṣṇavas and Vaiṣṇavīs, it’s very apparent what a wonderful and great devotee Brahmānanda Prabhu was and he has certainly earned this epitaph which is on his Samādhi: “Indisputably the favorite son of His Divine Grace Śrīla—A.C. Bhakti-Vedanta Swami Prabhupāda, Founder Ācārya of the International Society for Kṛṣṇa Consciousness.” 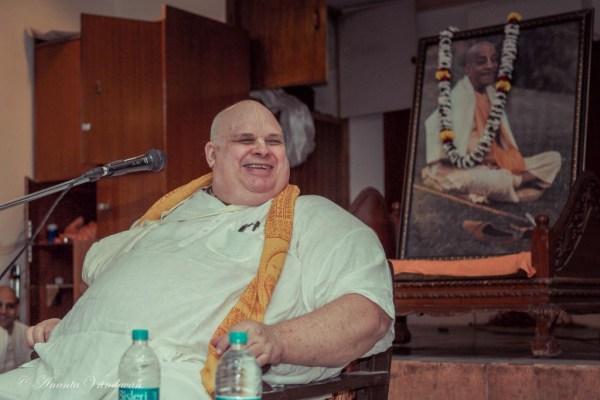 We all have our personal stories of association with Brahmānanda Prabhu. For me, I see him as my Vartma-Pradarśaka-Guru. Gargamuni Prabhu remembers that in 1970 I was working at the University of Michigan—in Michigan, Detroit. I was wandering through the grounds and I came across a Kīrtana party of four very effulgent personalities: Viṣṇujana Swami, Subala Swami, Gargamuni Swami at the time, and Brahmānanda Swami. This is what it took to make me a devotee. [Laughter]. I am going to get to that. I was just swept up with their love and their devotion to Śrīla Prabhupāda more than anything else. Viṣṇujana Swami was giving a talk to the students when we walked up and then he asked for questions, and some of the students were arguing, as it was an intellectual university. But he defeated them one by one and they all went away, and just myself and my former wife were standing there, so Viṣṇujana Mahārāja said, “Come, and I will tell you about my spiritual master, Śrīla Prabhupāda.” 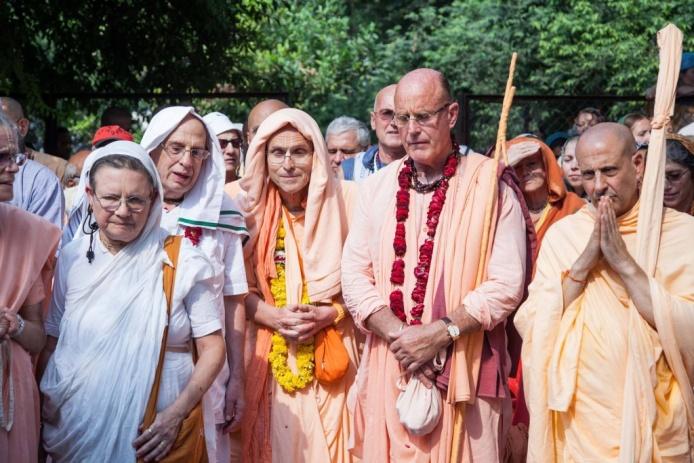 We sat down. He spoke for about a half an hour. And he said, “What do you think?” I said, “He is also my spiritual master now.” They were so potent, so powerful. Then, Brahmānanda was speaking to me, preaching to me, convincing me very quickly to become a devotee and he said, “Now, do you know where we can stay tonight?” So I said, “Well, we are staying in an apartment building that’s going to be condemned soon. People are living in a few apartments there, and there is an apartment next to us. You can stay there.” Then Brahmānanda Mahārāja said to Viṣṇujana Swami, “This nice young couple has invited us to stay with them, so we will stay there.” Then Mahārāja said, “What do you think?” Brahmānanda Mahārāja said, “Well, if we can have a nice feast, some nice Prasādam, we can stay with them.” [Laughter] 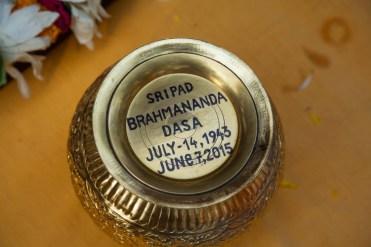 I said, “Okay, guys”—excuse me for my language, but that’s what I said—“Let’s go back to my apartment.” On the way, Brahmānanda looked at me and he said, “So do you have any money?” [Laughter]. I had just gotten my paycheck for working as a gardener at the University. I think it was around $455, so I said, “Yeah.” He said, “Give it to me.” He showed Gargamuni and Gargamuni nodded his head, so Brahmānanda said, “Sign the check.” I signed the check and then they cashed it at the supermarket and they spent every cent—every single penny of that paycheck—on the bhoga for the feast they were going to cook at our apartment. They cooked it and I think Gargamuni was cooking and Viṣṇujana Mahārāja was cooking and Brahmānanda Prabhu was waiting.

We sat down to take Prasādam, and me and my former wife—we had been on a fast for 20 days, because in those days, you know, spiritual life meant fasting and meditating and everything. I am thinking “How I am going to eat this feast?” Now it’s cooked, it’s offered, and everyone is sitting down there. I said, “No-no, we are fasting.” Brahmānanda Prabhu said, “No, you are not.” [Laughter]. If you knew him, he could be very heavy. I sometimes remember him as you know, strong as a thunderbolt and soft like a rose. For myself, he was always very soft like a rose, but this one occasion, he just pulled me into Kṛṣṇa Consciousness. He said, “No, you are going to eat.” And I broke a fast—a 20 day fast—with a huge feast.” And I survived. [Laughter].

As we were taking Prasādam, I noticed that in the time it took me to eat one plate, he ate five plates. [Laughter]. In the end, he looked at me and said, “This is Kṛṣṇa Consciousness.” [Laughter]. 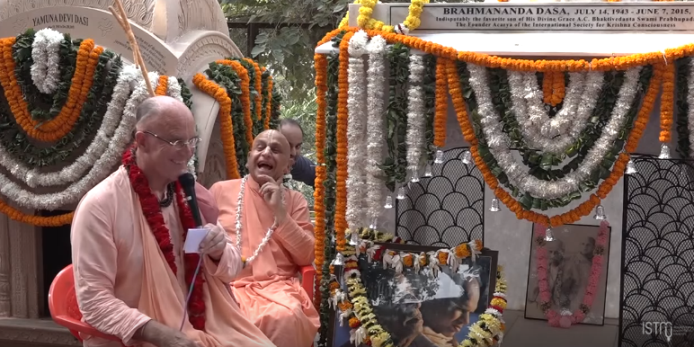 You know, with Gargamuni’s management, and Subala’s serving everything, and Viṣṇujana’s lectures, and Brahmānanda’s brotherly love, I became a devotee, so he is one of the persons who showed me the path of Kṛṣṇa Consciousness. I can honestly say I would not be here today without his and those other Prabhus’ mercy so this is why I have come to offer my gratitude to Brahmānanda Prabhu. Through the years, we would meet, from time to time.

A couple of years ago, I came here to the temple and I came in just before the Bhāgavatam class had started, and Brahmānanda Prabhu was giving the class and as I walked in he said, “Oh, Indradyumna Swami has come.” And he stood up and he sat down on the floor, and he said, “You give the class.” I was so embarrassed, because here is the person who had made me a devotee, who convinced me to give up material life, to take shelter of Śrīla Prabhupāda, and although he was a well-known personality and deserves so much respect, he showed genuine humility by stepping down and asking me to give the class. He was instructing us in so many ways. Another wonderful attribute that I remember about Brahmānanda Prabhu is his deep love and deep affection for Śrīla Prabhupāda. I think in all our minds this is what stands out probably most. That was demonstrated without exception, whenever Brahmānanda Prabhu would give a class about his memories of Śrīla Prabhupāda. Inevitably, sometime during the speaking he would cry. Tears would come to his eyes. This of course you know is the perfection of Kṛṣṇa Consciousness, when we can feel some deeper emotion and actually tears can come to the eyes, expressing our love for Hari, Guru, and Vaiṣṇava. 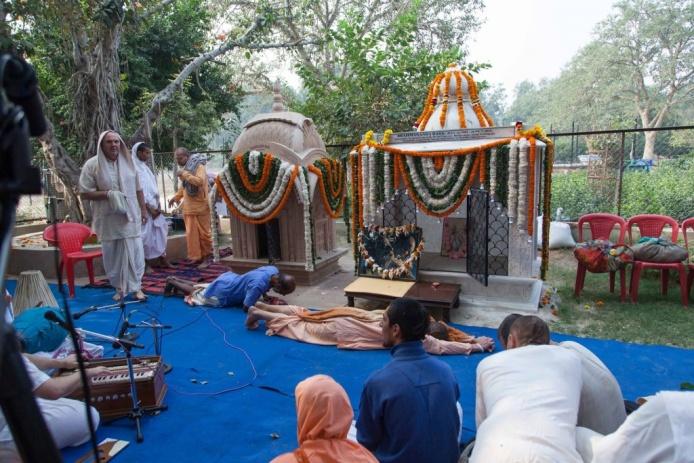 But along with the instruction of the spiritual master comes the ability to fulfill it, so because he was such a surrendered soul to Śrīla Prabhupāda he was successful against all odds in Africa. Prabhupāda understood this and as Prabhupāda’s secretary was reading Brahmānanda Prabhu’s report about his preaching, the secretary told me Prabhupāda started crying; tears. At the end of the reading, he said, “Brahmānanda has done so much for me. He has sacrificed his very life for me.” Prabhupāda was crying. So this is love, and the love is demonstrated, the genuine symptoms are there. As Brahmānanda cried out of love for Śrīla Prabhupāda, Śrīla Prabhupāda would cry out of love for his disciple. This gives us a glimpse of how deep is the relationship.

When he passed away, naturally in our community, devotees asked the question, “Where did he go?” We can’t speculate like that, but:

“Our next destination is determined by our Consciousness at the moment of death.” No one can doubt where Brahmānanda Prabhu’s consciousness was when he passed away. It’s where it always was—at the lotus feet of Śrīla Prabhupāda. Wherever Śrīla Prabhupāda is, whether he is continuing his preaching mission somewhere in this material world or he is engaging in his Nitya–Sevā in the spiritual world, I have no doubt and I am sure none of you have any doubts, that’s where Brahmānanda Prabhu is. So our loss is their gain. As Gargamuni Prabhu was saying, these ceremonies are simultaneously emotionally difficult, but very joyful as well. As Bhaktivinode wrote that famous verse which is on the Samādhi Mandir of Haridāsa Ṭhākur in Purī: “He reasons ill who says that Vaiṣṇavas die, when thou art living still in sound! A Vaiṣṇava dies to live and while living tries to spread the Holy Name around!”

I am convinced that Brahmānanda Prabhu is with Śrīla Prabhupāda; it can only be because that’s where his heart always was, so that is very joyful. We miss his association. For so many years now, we have been coming to Vṛndāvan, we would always come to his talks in the evening at the temple, and he would recount about Prabhupāda.

We miss him, but we hope that we can become as qualified as he was, as wonderful a servant of our spiritual master as he was, have as much love for his spiritual master as he did, and be as capable of rendering incredible service, like Africa and pioneer preaching in New York, etc., etc. I think we can truly give him another epitaph; this is one here, but I think for any ISKCON devotee, probably the most important title we could ever give a devotee, we can give it to Brahmānanda Prabhu: “He was definitely a Prabhupāda Man.”