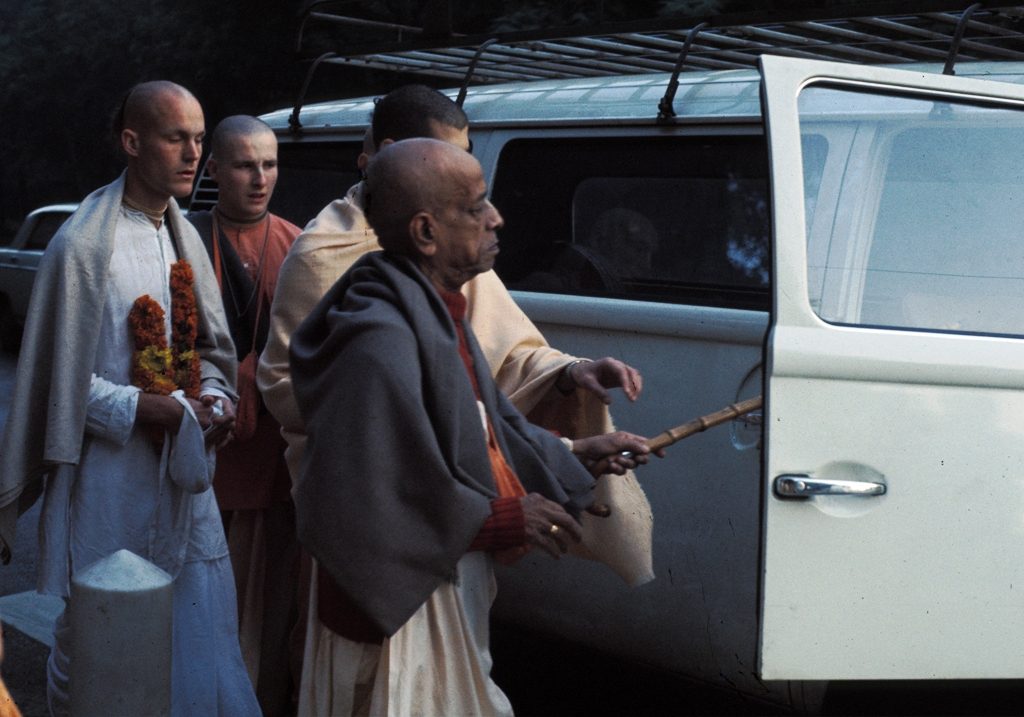 Today is a very special day. It’s the departure day of the Founder Ācārya of the International Society for Kṛṣṇa Consciousness—His Divine Grace Om Vishnupada Paramhansa Parivrajakacharya Ashtottar-Shata Śrī Śrīmada Śrīla A.C. BhaktiVedanta Swami Śrīla Prabhupāda. I have chosen not to speak today. This is always for me, this is a difficult day. I have asked Mother Śītalā to speak today. Has Mother Śītalā arrived? Oh, okay, Mother Śītalā is here, so she will be speaking today. 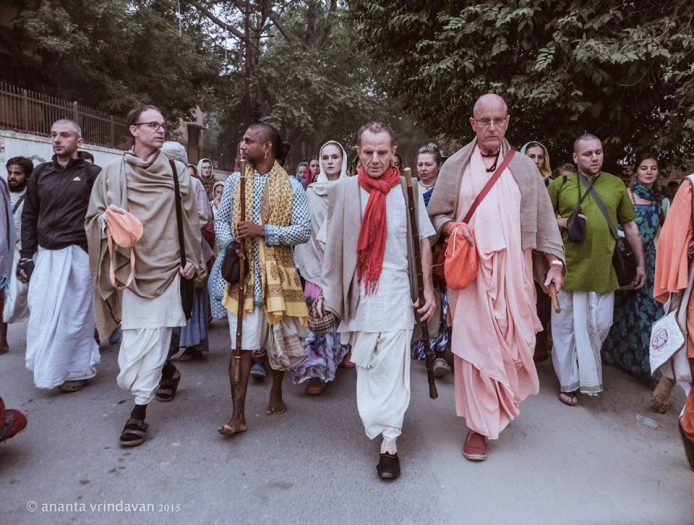 This is a very beautiful setting that we are in. This is the Āśrama of Durvāsā Muni in Vṛndāvan. Actually we have mentioned Durvāsā Muni a number of times during our Parikramās here in Vṛndāvan through the years. He is a Muni; he would travel to different holy places, but this was his ashram in Vraja, right here on the banks of Jāmuna. Fortunately, it still remains much as it was for the last hundred years. It still has that old Vraja feeling to it. Under this Banyan tree, literally on the banks of the Jāmuna river, and in the past years, we have discussed the particular pastimes that have taken place here. 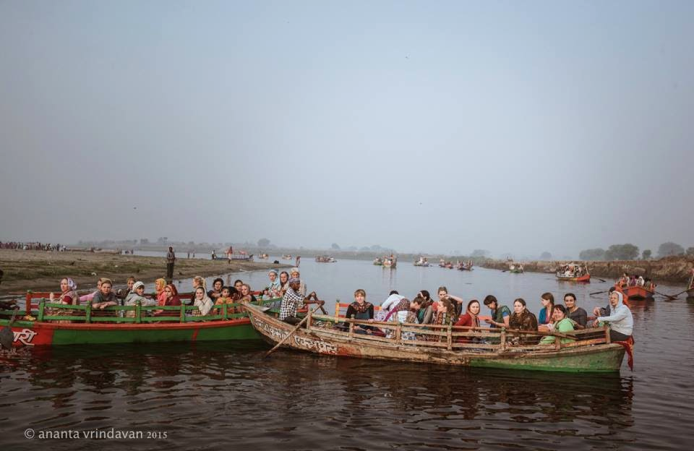 But we won’t touch on that today, because this is Śrīla Prabhupāda’s disappearance day, so that will be the theme of today’s visit, and in coming years we will recount again the pastimes of Durvāsā Muni here. I always like to come here and bring the devotees here, because of its special atmosphere—it’s kind of like what you would have imagined Satya–Yuga would be like.

Of course, our old friend Bābāji is here. He is not so old; he is in his thirties, but he is a Pakka (fixed-up or determined) Brahmacārī, Pakka Sādhu. He stays here all year long despite whatever austerities may be. He is very fixed in his vows and in his practices in spiritual life. You can see he is very simple in his living style. He leaned over today, and he said to me, quietly said, “After so many years I have conquered hunger.” Kṛṣṇa glorifies Arjuna in the Bhagavad-Gītā for conquering sleep—Guḍākeśa, so these things: conquering sleep, hunger, senses—these are not easy things to conquer. He confidentially said, “Mahārāja, I have conquered hunger.” 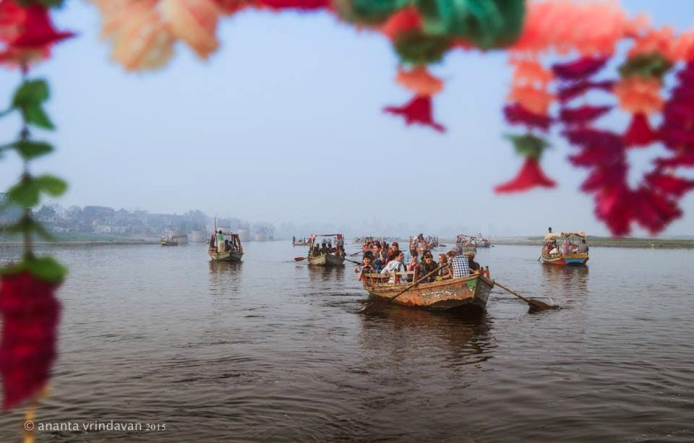 I remember last year I said to him, “In my next birth I want to be just like you.” He said, “No, you are doing the best work. You are preaching Bhagavad-Gītā.” Then he quoted the verse in Sanskrit where Kṛṣṇa says that, “There is no one more dear to Me than those who are preaching this message.” He said, “You do what you are doing, so I am doing what I am doing; you do what you do. We will both go on.” 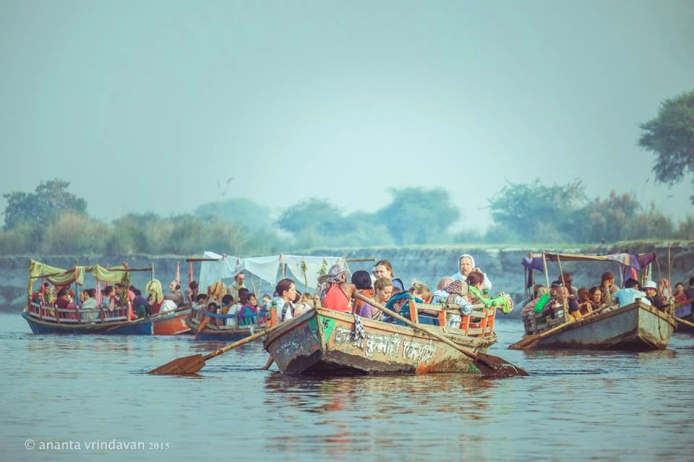 Of course, all of this is for us. It’s all due to Śrīla Prabhupāda’s mercy that we get to come to Vṛndāvan Dhām, take boat rides down the Jāmuna river, touch the sacred water of the Jāmuna, come to secluded holy places like Durvāsā Muni’s ashram, meet the Sādhus who are living here; chant ‘Hare Kṛṣṇa’ in the association of so many wonderful devotees in a holy place. Just one of these things is great fortune, so we can hardly imagine how fortunate we are, and what to speak of fortune that we are everyday going out into Vṛndāvan and experiencing all this. 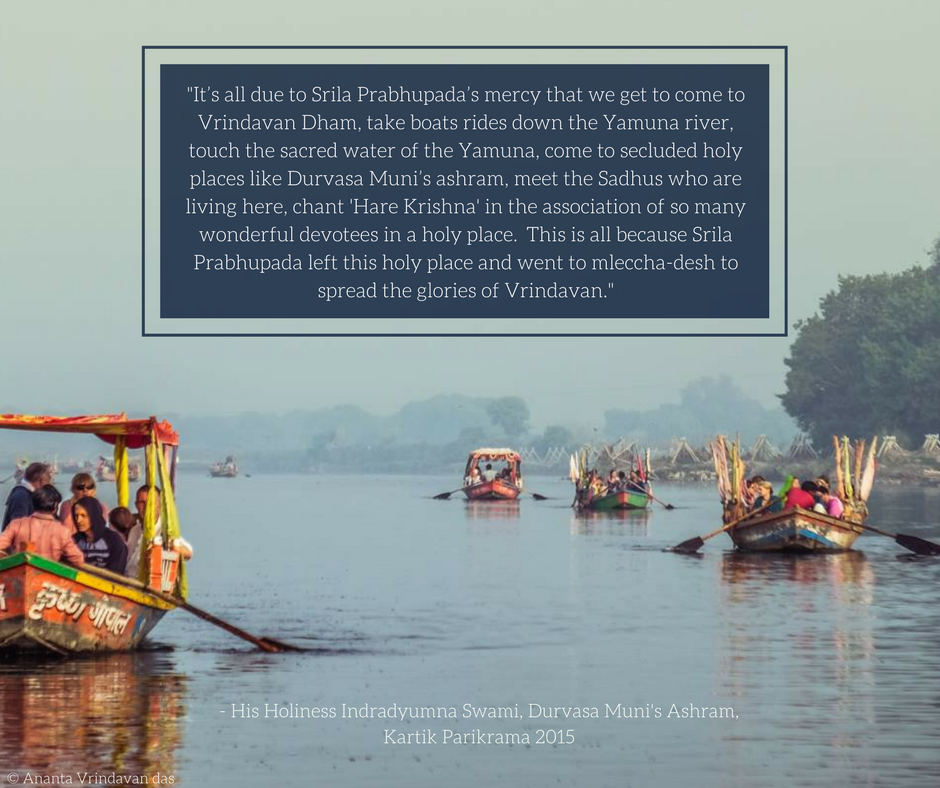 This is all because Śrīla Prabhupāda left this holy place and went to mleccha–desh, went to the west to spread the glories of Vṛndāvan. Had he not done that, none of us would be sitting here today. 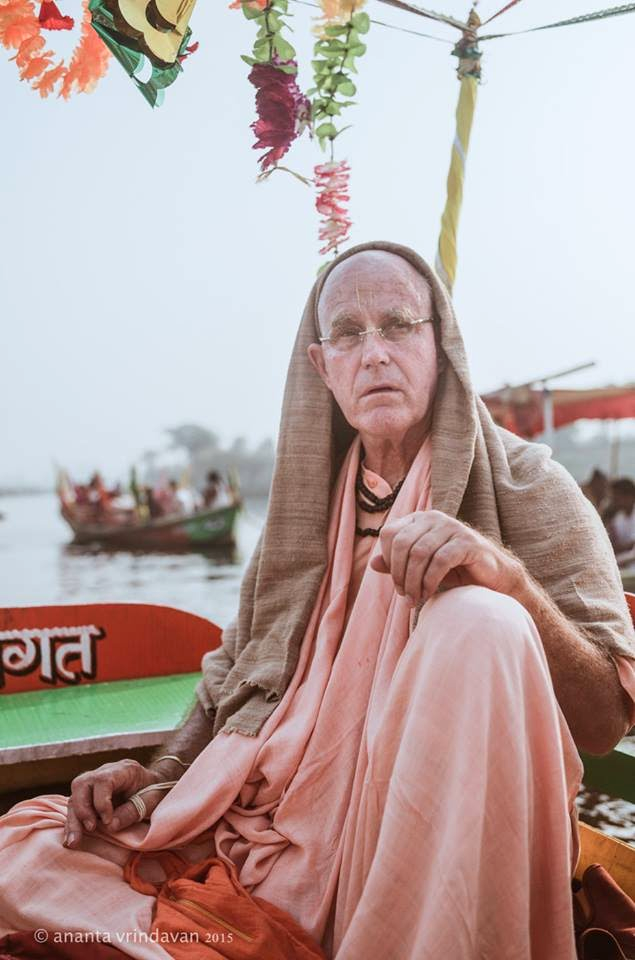 In the Skandh Purāṇa there is actually a very strict warning, that a person who is interested in his deliverance from the repetition of birth and death, of achieving mokṣa —liberation; that person should not cross beyond the boundaries of Bhārata or India, because everything becomes more and more inauspicious, the further you go from Bhārata. Just like a lamp is burning and it’s very bright around the lamp, but the further you go from the lamp, the darker it becomes. Sādhus were forbidden to leave India because of the bad association, sinful activity that exists in another part of the world; but Prabhupāda took that risk for all of us. 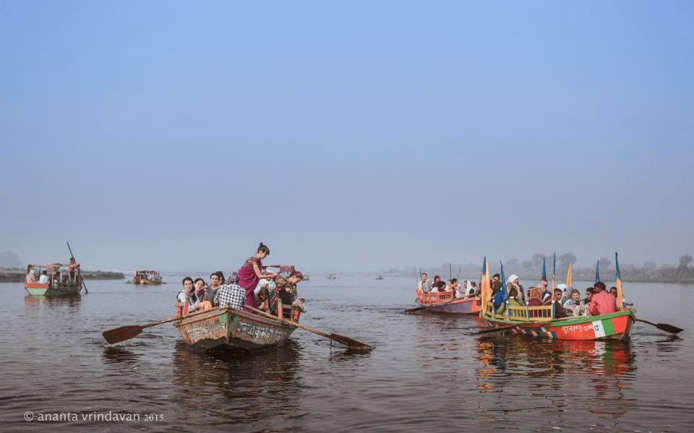 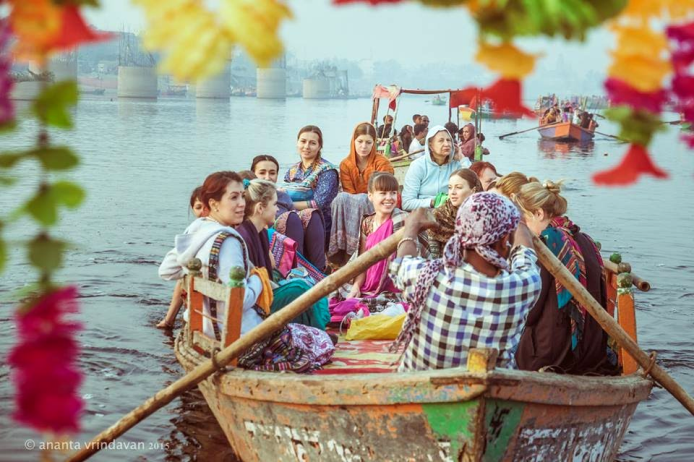 Taking upon his head that great responsibility of carrying Lord Caitanya’s desires to spread Kṛṣṇa Consciousness all over the world, he was fully protected by Guru and Gaurāṅga. But that doesn’t mean he didn’t have to endure so many hardships  and so many austerities, and so many difficulties in establishing Kṛṣṇa Consciousness in the west. One time he told us, someone asked, “Well, what was the first year for you like in America?” Prabhupāda said, “You will not believe the difficulties I underwent that first year.” He never really revealed how he struggled that first year. But history has shown the great success that was there and after a few years. After the movement was somehow established in the west, Prabhupāda came back here to Vṛndāvan with a desire to establish a temple: Kṛṣṇa–Balarāma Mandir, so that Westerners could come and get the Vṛndāvan experience, which is so important to our evolution or progress in Kṛṣṇa Consciousness. 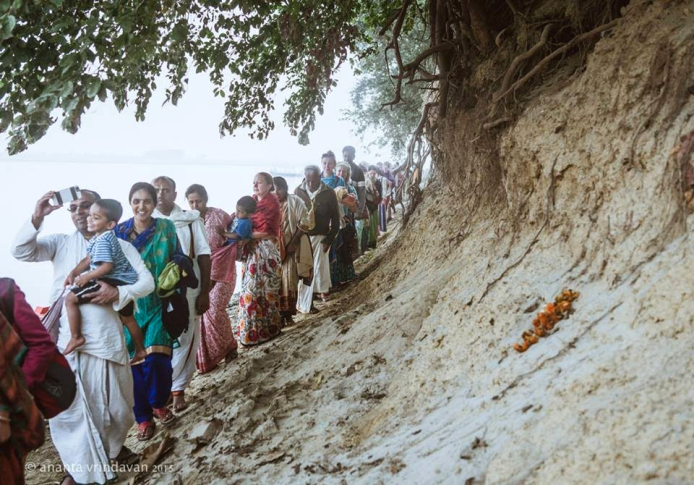 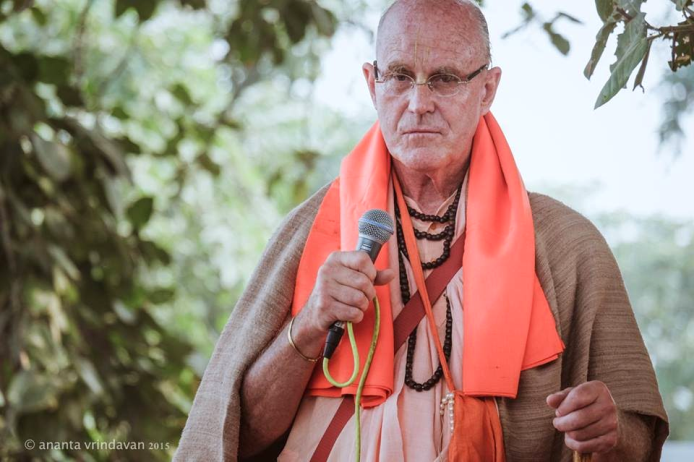 We will begin with, as we always do, to create that wonderful atmosphere of auspiciousness and our ability to focus on all these transcendental subject matters. We will have Mādhava Prabhu leading us in a very melodious, beautiful, and deeply devotional Bhajan, and then one of His Divine Grace Śrīla Prabhupāda’s most senior and beloved disciples, Ṭhākurāṇī, will speak about some of the glories. How much can you speak about Prabhupāda’s glories? They are unlimited, but she shall speak on the glories of our Spiritual Master.

Then Baḍa-Hari Prabhu will lead us in Gurupujā; then we will sing “Ye anilo prema-dhana”………….. [Voice of His Holiness Śrīla Indradyumna Swami Mahārāja choked in deep separation and remembrance of Śrīla Prabhupāda. [Tears rolled down his cheeks and he excused himself from the announcements and went into seclusion for a few minutes.]